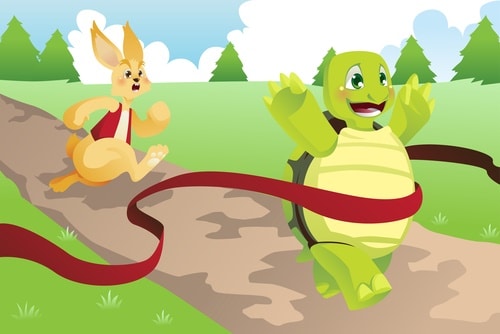 Getting what you want fast can be addicting.  Getting where you want to go in a hurry is exciting.  Achieving your annual sales goal by mid-year is exhilarating.  But slow and steady will produce more long term, stable results.

It takes time to do anything worthwhile, but the time doesn’t need to be in one big chunk.  Focus instead on smaller pieces of time.
Sean, Bill and Jared are neighbors: each is married, of average health, height and body weight, earning $60,000 a year.  It’s their attitudes that set them apart:
Jared plods along, doing what he’s always done, complaining occasionally but not making any changes.
Sean starts making small, seemingly inconsequential changes.  He listens to 30 minutes of instructional or inspirational podcasts on his way to work.  Upon hearing an interview with Dr. Oz, he cut 125 calories every day, less than a can of non-diet soda.  Not a big deal.  He also started walking more and using stairs instead of elevators; stuff anyone could do.  Sean is determined, he knows his changes are small and could be easily abandoned.
Bill purchased a big screen TV to watch his favorite programs.  He’s been trying recipes he’s seen on the Food Channel – cheesy casseroles and desserts are his favorites.  He also installed a bar in his family room and added one drink to his diet every week.  Nothing crazy.  Bill just wants to have a little more fun.
At the end of six months, there are no perceivable differences between Sean, Bill and Jared, although each has his own pattern of behavior, six months isn’t enough time to see measurable difference.  At 15 months, there still is no discernible change to an observer.
However, after 25 months, the differences have become apparent and startling.  Sean has lost 30 pounds!  Sean’s self-improvement audios have earned him a promotion and a raise; his marriage is also thriving.  His small changes are now habits that have blended into his everyday life.  Bill on the other hand, gained 30 pounds, is unhappy at work and his marriage is on the rocks.  Jared is pretty much where he was two years ago, except he’s a little more bitter.
This method of change is simple, but not easy.  The most challenging aspect of slow and steady is that you have to work at it for a while before anyone can see the payoff.
Is there an area of your life that needs improvement?  A goal you have thought about but keep putting off?  Start today!  Whatever you want to achieve, the path may be a continuum of mundane, unsexy, unexciting and sometimes difficult daily disciplines performed consistently over time.  You can do it.