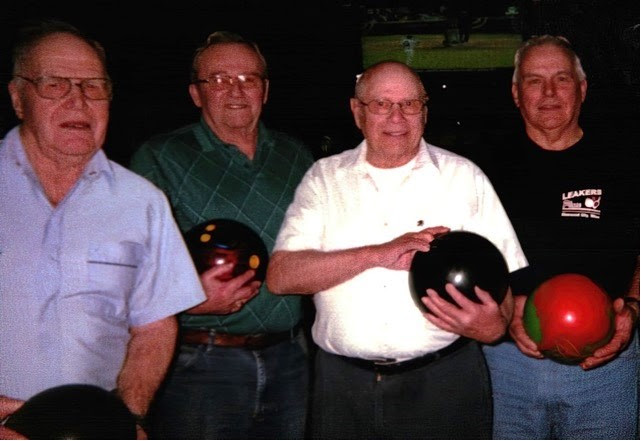 My father, Gaylord Johnson, passed away this week, just six days shy of his 95th birthday. Old age, Covid-19, and pneumonia took him from us.

a
To honor Dad, I am reposting a blog I wrote about him and his friends over eight years ago.I hope you enjoy it as much as I enjoyed reminiscing.
a
My father was a deer hunter, although now that I think about it, I don’t ever recall him bringing home much venison. What I do recall is his excitement about heading up to a shack in the woods near Minong Wisconsin with his buddies. There were two electric light bulbs hanging from the ceiling, no running water, and a kerosene stove for heat. Behind the shack was the “one-holer” outhouse. Ah, life didn’t get much better than that; it was male bonding at its best.

Dad still sees a couple of those guys he used to hunt with. Now he has breakfast with them every Monday and bowls with them Wednesday afternoon. Watching them gossip and needle each other is like turning back the hands of time. These men are comfortable with each other. They’ve been in each other’s lives through the birth of children and the death of spouses.

Geoffrey Greif, a professor at the University of Maryland School for Social Work wrote a book called Buddy System: Understanding Male Friendships.  He describes the pals men choose as “just”, “must”, and “rust”.

Your “just” friends are people who live with you in the dorm, work with you on the job, or men you know from the community. They are your acquaintances. You might hang out with them if you are free but you most likely will not make plans to see them in advance. “Just” friends are the lowest level of friendship.

“Must” is the highest level of friendship; these are the people you must call if there is a crisis or if you hit the lottery.
Dad and his cronies are “rust” friends. A “rust” friend stands the test of time. According to Greif, “even if “rust” friends don’t see each other for decades, they’ll pick up again like kids.”

The point to this week’s blog is this: our “rust” friends are an important part of who we are. They bring balance to our lives and remind us where we came from. They’ve shared our ups and downs and are who we turn to in time of need. If you’re lucky enough to have a “rust” friend, call – touch base and catch up. “Rust” friends, despite their name, are golden.

a
Time is precious. We are grateful you’ve chosen to spend some with us today.