David Blaine has always been fascinated by magic. As a kid, he practiced magic tricks over and over until he could do them perfectly.

His favorite magician is Harry Houdini. He would beg his sister, mother, and babysitter to tie him up so he could escape like Houdini.

Why did he love Houdini so much? He was a showman! He didn’t just do a trick, he made it an experience you would never forget.

David Blaine became a world-class performer; “good enough” was never enough for him. He uses “tricks to shock and engage people”.

It’s what Blaine does before the trick that’s important – he utilizes publicity before his shows to create anticipation. Everything he does is focused on getting validated by other respected people in his industry. He plants stories, he shares testimonials, he uses words like astounding, renowned, exciting, and explosive. He paints a picture of the experience people will have.

Memorable magicians understand the importance of building up to the trick. They get your attention, draw you in, create intrigue, and build suspense. When the audience finally sees the trick, they are bowled over.

Surprise
Magicians never do the same trick in front of the same audience twice. Why? Because you can only surprise someone once. The first time no one knows what to expect. Check out this video; you’ll never guess what David Blaine is going to do…. 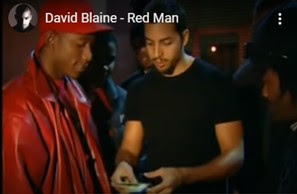 To keep an audience guessing, approach tricks from different directions. Change up your introduction. Be willing to present contrary viewpoints.

In business it’s not easy to pull a rabbit out of a hat, to engage people, to get them to believe in something unbelievable. But it can be done. It was Steve Jobs who said, “People don’t know what they want until you show it to them.”

A leader describes the benefits of a product in a way that appeals to customers, convincing them to buy even before they understand all the benefits. They motivate staff to accomplish miraculous feats. Then they step aside and watch the magic happen.

To learn more about David Blaine and his approach to magic, click HERE.
a

Time is precious. We are grateful you’ve chosen to spend some with us today.